My Thoughts on Dante's Divine Comedy Adapted by Seymour Chwast

127 pages.
Where I got it: The public library
Challenges: The Graphic Novels Challenge

Lately I have really enjoyed me some epic poems in new forms or new translations.  I had to reread Beowulf for my M.A. exam, and I was surprised by how much I genuinely liked Seamus Heaney's 2001 translation.  Then I picked up the most recent version of Sir Gawain and the Green Knight, a poem I remember liking anyway, but liked particularly as translated by Simon Armitage.  Now these are both new translations, in verse, that are in my opinion better than the translations that I have read in the past, but that aren't playing with form or anything of the sort.  I had also read both of these epics previously.

But then, Armitage published a "dramatic retelling" of The Odyssey in 2008.  I haven't ever read Homer *gasp.*  I tried to read both epics - The Illiad and The Odyssey - as a summer project after college, but I didn't get too far.  Maybe someday.  But anyway, I really enjoyed the version that Armitage produced, despite what I imagine are substantial differences from the "original."

And that leads me to Seymour Chwast's graphic representation of Dante's Divine Comedy.  First of all, Chwast condenses all three parts of the epic into 127 pages without a lot of text.  As many other reviews have noted, this leaves the reader a little short on context.  I was also, again, going in a little bit blind, since I haven't ever read much Dante  (yet another aborted attempt, this one in high school). Although I did get a feel for Dante from reading this, it was a bit disjointed.  The story took on qualities of the absurd, broken down into little snippets of information that sometimes felt unrelated and without transition.  The panels are also rather large and unconventionally broken up on many pages, with sloping and scattered text, which adds an additional level of disorientation for the reader.  I believe this is intentional, capturing the disorientation Dante feels as he is rapidly and blindly guided through the Hell, Purgatory and Paradise.

Then, there are the illustrations.  Chwast's Dante looks quite a bit like Dick Tracey, in a trench coat and fedora, with an ever-present pipe hanging from the corner of his mouth.  All of the illustrations have an air of 1920's camp that makes them playful and a little frightening at the same time.  For instance, the entrance to Hell appears like the entrance to an Art Deco casino with the word "Hell" in flashing lights.  The minotaur is dressed in a striped wrestling unitard and Paradise is littered with buxom beauties in flapper dresses.  The illustrations are all black and white, and are certainly "cartoonish," but not lacking in detail.  Dante's journey through the underworld visually reminds me of many things:

3. Loteria Cards and Day of the Dead 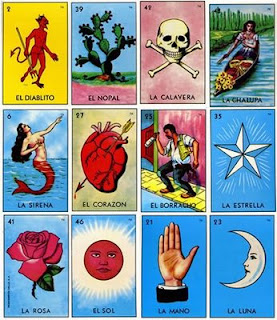 None of these things is bad.  In fact, they are quite awesome.

So, my bottom line is that this is no replacement for Dante, nor is it meant to be.  However, it does give a very diluted understanding of the political and theological implications of the original text.  What it really gives the reader is a dizzying visual journey through Chwast's very unique  representation of Dante's path.  Look out, because there be monsters.

Now, someone just has to do something fun with The Canterbury Tales.
Email Post