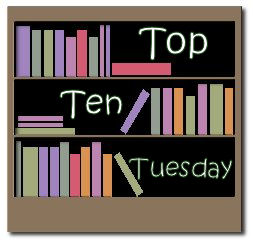 It is another fabulous Top Ten Tuesday at The Broke and The Bookish. This week's topic is top ten debuts (ever):

10. William Gibson, Neuromancer: Although I consider this book a little more stylistically clunky than the other Gibson I've read - Pattern Recognition - his brilliant insight and detailed description are very apparent in this, his first book.

9.  Chuck Palahniuk, Fight Club:  This doesn't really count, because I haven't read this book.  However, if you see my last post about Palahniuk, I have read other books by him and  I was impressed to learn that Fight Club was his first book.

8. Leslie Marmon Silko, Ceremony: This isn't really one of my favorite books of all time although I do find it thought provoking and a mighty impressive debut.

7. Bret Easton Ellis, Less Than Zero: Bret Easton Ellis' first novel, set in Los Angeles and starring some East college private college students, home for Christmas break, perfectly captures their life of privilege and ennui.  Although this isn't my favorite Ellis book (that would be Lunar Park), it is still a pretty impressive debut, written by Ellis while still in college.

6.Theodore Dreiser, Sister Carrie: I'm not sure that everyone feels the same way, but I love me some Sister Carrie.  Although I haven't read An American Tragedy (the big Dreiser), his first book published in 1900 is an incredible portrait of the title character and her quest to satisfy her desires.

5. Nathaniel Hawthorne, The Scarlet Letter: I seem to be able to fit my blog's namesake, and the first novel Hawthorne published under his own name, into many of my top ten lists.

4. Dave Eggers, A Heartbreaking Work of Staggering Genius: I first read Eggers first book riding subways in London.  I loved it.  This book made me laugh out loud.  It's riotous, and still emotionally affecting.  I still love the older, more socially aware, and perhaps more serious, but still funny Eggers as well.  Zeitoun was my favorite book last year.

3. Zadie Smith, White Teeth: I've read this one twice and it was one of my favorite rereads of all time.  The first time, I read it too slowly (kind of a strange thing to say), and I lost some of the brilliant detail and some of the voice by leaving it sit for long periods.  When I picked it up to read it for a Contemporary British Literature class in grad school, it really came alive for me, and now I consider it one of my favorites.

2. Ralph Ellison, Invisible Man:  I consider this among the best novels of the 20th century.  I've read it a few times and it only gets better.  Brilliant.

1. Mary Shelley, Frankenstein: Mary Shelley was a teenager when she conceived of Frankenstein, one of the most impressive meditations on the anxiety of reproduction ever written and a great Gothic novel to boot.

*This was a really hard one, and I totally cheated and included a book I hadn't read and one that wasn't technically the author's first if you count an anonymously published book.  I definitely did some research here and it was interesting to see which author's wrote their "best" book first and which didn't really come into their own until later in their careers.  Good topic...lots of work.
Email Post