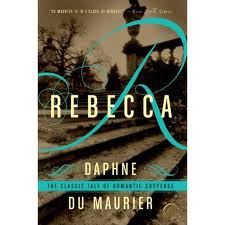 I am currently participating in the Rebecca readalong hosted by Allie at A Literary Odyssey.  These are my thoughts on the first half of the book, and there may be some spoilers.

The first thing that really struck me about this book was how totally 19th century it feels.   Rebecca was published in 1938.  To put that in context as a literary historian, that is two decades after James Joyce began publishing the serialized version of Ulysses in 1918.  Rebecca was a wildly popular novel, but isn't often read by scholars (at least not for scholarly reasons:).  It just seems incredible to me as I read it that modernism in the literary world had happened, everything was different in terms of what novels could be and could do, and here is Rebecca, a novel that is perfectly in line with what the 19th century novel was all about: social mores, and class issues, with perfectly generic Gothic tropes (the uncanny domestics and vague sense of uneasiness that permeates novels as far back as Radcliffe).

Now, I'm not necessarily saying there is anything wrong with that.  But my first question as I read it was: Why are people still reading this?

However, if I put my literary snobbery aside, I can see some of those reasons.  It is a really great example of Gothic literature.  I love those old Gothic novels (well, not Radcliffe, but I digress).  One common trope in Gothic lit is the uncanny domestic, or the scary servant, and Mrs. Danvers is terrifying with her skull-like features and creepy obsession with the deceased Rebecca. Also, the  labyrinthine Manderley is a great backdrop for and reflection of the narrator's internal confusion and unease.  Finally, there is the narrator herself, an innocent, unfamiliar with the lifestyle of the aristocracy that she has stumbled into, unprepared.  She is an effective narrator- but I don't like her.  Her lack of assertiveness and her lack of ability to "read" others is irritating to me.

Finally there is the action in the novel.  It starts out with a bang, with the famous lines that tell us that eventually the narrator will go to Manderley and then leave again (talk about a spoiler), but then there aren't too many surprises through most of the first half.  If people read this because of its plotting and readability, I am hoping that picks up in the second half.  So, overall, my review so far isn't glowing, but I am still optimistic.  After all, this is still one of the most popular novels of all time- talk about hype- and the second half is already feeling more lively than the first.  So, here's to more mysteries being revealed.
Email Post