My Thoughts on Paris, and Hemingway's A Moveable Feast- My very long post...

It was all part of the fight against poverty that you never win except by not spending. Especially if you buy pictures instead of clothes. But then we did not ever think of ourselves as poor. We did not accept it. We thought we were superior people and other people that we looked down on and rightly mistrusted were rich. It had never seemed strange to me to wear sweatshirts for underwear to keep warm. It only seemed odd to the rich. We ate well and cheaply and drank well and cheaply and slept well and warm together and loved each other.


I love Hemingway, although I know not everyone does, and I've been to Paris three times.

The first time I went to Paris, I was on a high school trip, and what I remember is being shuttled from attraction to attraction, awed at Notre Dame and pretending to spit from the top the of the Eiffel Tower.

The second time I went to Paris, I was stopping over on my way back to London from a spring trip to Scandinavia.  I had spent the last two weeks backpacking, wearing the same clothes and absolutely freezing.  I came to Paris, where it actually felt like spring, and felt the magic, for a minute that people talk about when they describe their love of Paris.

The third time I went to Paris was this May, with my lovely husband.
This time was different, since we had planned activities for the trip, and we had more flexibility and time than I had had on any of my previous trips.  And there were some lovely moments:

1. Sunset at the Sacre Coer
2. A delicious meal at L'Atelier de Joel Robuchon.  I had the quail, which was amazing, but barely any food.  If you go, I would definitely get the many layered chocolate dessert, which is one of the best things I've ever eaten.
3. The architectural feat that is Notre Dame
4. Lunch at Aux Lyonnais (featured in Midnight in Paris)
5. The incredible Impressionist paintings at the Musee d'Orsay
6. Drinking coffee in street cafes
7. Finally finding Shakespeare and Co after a lot of walking around in circles.

And then there were the not so great parts.

1. It was hot.  And I really hate heat. We went on a lunch cruise in a glass boat, which functioned like a greenhouse, and the approximate temperature inside was 110 degrees.
2. Our hotel was not great.  It was super close to the Gare du Nord, which is convenient for train travelers, but not the most romantic of neighborhoods. The AC wasn't on, and it was noisy.
3.  This had happened in Amsterdam: 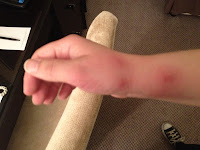 Those are terrible bug bites making my hand swell.  I took a nap in a park, and got these, and then the heat inflamed them (not to mention that I was nervous they were bedbugs and freaked out for quite a while when I got home).  They were all over my body, but the hand picture is the most suitable for the blog.  I ended up seeing a doctor in London when we returned, but I spent a lot of Paris itchy, wearing long sleeves to cover my bites, and kind of doped up on Benadryl.

The bites were pretty traumatic, but I'm trying to work through them by focusing on the highlights of the trip:)

So, anyway, it was a bonding experience for the hubby and I, and although we had a great time on the trip, Paris wasn't the highlight.  It wasn't the literary, romantic Paris that I always want it to be when I go.  However, in retrospect, I love the opportunity to ride the subway, and see the out of the way Paris, and it is comic to think about squeezing into the hot cars like sardines, or opening our hotel windows wide to hear the sounds of shouting and breaking glass at the rowdy pub below us, or fanning ourselves while we try to eat our cheese plates on the hottest cruise in the world.  Next time, I just plan to have a whole lot more money to stay at a posh hotel, and better weather:)

AND NOW I WILL TALK ABOUT THE BOOK FOR THOSE OF YOU SKIPPING ALL MY OTHER BLATHER.

A Moveable Feast has lots of descriptions of the wonderful, lit up, decadent Paris filled with ex-pat artists, which might just be my dream world.  Since it is basically a memoir of Hemingway's time living in Paris, it isn't the prime example of the "Hemingway style" that you might find in other works.  However, it is just amazing to think of all of those great minds together, eating and drinking away from home.  The parts featuring F. Scott Fitzgerald are the highlights for me.  They are comic for certain.  I also like to hear Hemingway talk about what it means for him to be a working writer, and the struggles with time and money that those ambitions entail.   Overall, a great, worthwhile read for fans of Hemingway and fans of Paris.

But Paris was a very old city and we were young and nothing was simple there, not even poverty, nor sudden money, nor the moonlight, nor right and wrong nor the breathing of someone who lay beside you in the moonlight. 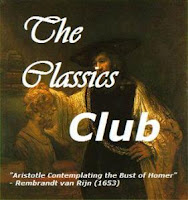 209 pages.
Where I got it: Bought it used
Challenges: The Classics Club

Buy A Moveable Feast at Amazon